It sounds like the title of an old Anna Neagle film or a novel by Thomas Armstrong. In fact, there was really only one Hannah of Hannahfield, and this paper is as much an attempt to show the fascination of tracing family history, as it is a story of the Hannahs of Dumfries. This, I hope, will encourage others to try to find out more about their own branch of the Clan. As you will know, in recent years there has been an increasing interest in genealogy and family history. My own interest only dates back a few years, when retirement allowed me time to take up research. I heard of our Clan Society from a Hannah cousin and he lent me a copy of the family tree, which had been prepared m support of a petition to the crown in 1870 by our great grandfather for the return of the property in Dumfries called Hannahfield. 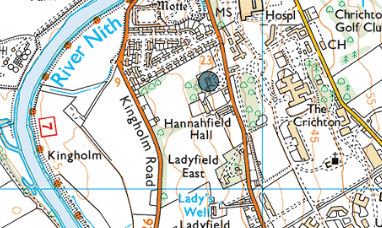 I already knew of this and had spent a short holiday in SW Scotland, when I discovered the family grave in St Michael’s Dumfries and tried to locate Hannahfield in the area of the Kingholm. The first Hannah on the family tree was John, born in the 17th century. He had two sons, one of whom was baptised at Penningham in 1696. This is the first place mentioned and thereafter only places of burial are noted. These two sons each had among other children, a son and he two cousins Alexander and Robert who married sisters Rachel and Agnes Blount. Of the two families, Alexander’s at one time went to Huddersfield and Robert’s to Dumfries.

Robert and Agnes had a son, John born in 1761 who became owner of the Hannahfield estate [also known as Ladyfield West]. He died unmarried and it is his brother Alexander who is my ancestor. John was born at a time when economic conditions in Scotland were improving and the country was enjoying peace for the first time in centuries. Agriculture, industry and transport systems were developing. Literature, art and architecture were flourishing and many Scots made fortunes in the colonies. John was one such and owned an estate in Jamaica called Hannah’s Town. According to the book ‘Memories of St Michael’s’ he amassed a fortune in the West Indies. It has been suggested that he might be the originator of the Antigua farthing token coin in 1836 – attributed to Hannah & Coltart – but Antigua is a long way from Jamaica and there is nothing to suggest any links.

My great grandfather, another John, did succeed to the Jamaican property, but according to the petition, had to wait seven years before he received any rents. I do not know how long he enjoyed these rents, but through business reverses he lost the property, which (I quote) “was a further disappointment to the petitioner.” These reverses may have been in the woollen trade in Huddersfield or in Jamaica itself. In 1846, five years after my great grandfather inherited the Jamaican property, the Sugar Equalisation Act was passed in Britain as part of the Free Trade Policy, which eventually abolished all protective duties, which favoured the colonies. Rum, coffee and other exports were involved and in 1847 a commercial crisis in Britain also contributed to the ruin of the plantations. I do not know what type of plantation Hannah’s Town was; research continues.

We know more about the Dumfries property and its loss to the family. Part of it called Kingholm, was bought from the burgh in about 1827, at a time when the Council was in financial difficulties. Another part of the property had the attractive name of ‘Cherry Trees’ but its doubtless proud owner changed the name of the whole estate to Hannahfield. He apparently always said that he intended a Hannah to live there after his death and his only relative of that name was his cousin (a few times removed) – my great great grandfather. He did however, have a nephew, his sister’s son Thomas Wood, and it was he who inherited under Scottish Law when John died at the age of 80 without leaving a will. Thomas Wood had no children and at the death of his widow in 1868 the property passed to the Crown. Kingholm was the place where the traditional competition by the Trades for the ‘Silver’ Gun given by James VI was held and the burgh was anxious to regain this historic site. They petitioned Queen Victoria to re-grant them the land and this was in 1873. The Hannahfield monument in St Michael’s Churchyard described in the Memorials as a stately modern (i.e. in the 1870’s) monument in the Grecian style’, commemorates all these people, including John’s parents, Robert Hannah and Agnes Blount.

It is interesting to see that Thomas Wood’s brother James was buried at Kingston, Jamaica at the age of 19, and one surmises that he was there on his uncle’s business. Some of the Blount family, cousins of the Hannahs also died in Jamaica, according to the other monuments.

Now I turn to the Hannahs of Huddersfield. The first Hannah who appears to have lived in Huddersfield was another John, who also died unmarried. He was a son of Alexander Hannah and Rachel Blount and was born in 1758. We know nothing of why he went to Yorkshire but it would seem that he was joined by his nephew, yet another John, (the same John who was promised the Hannahfield property). The latter’s father, Alexander, was buried at Manchester and some of his family at Blackburn, so perhaps the two brothers both entered the textile trade – one in wool and the other in cotton. 11 A trade directory for 1845, when he was 48, shows John Hannah & Company, Woollen Cloth Manufacturers and Merchants, and the petition referred to him as head of one of the “oldest established firms in Huddersfield.” I have an album, which belonged to his wife Margaret, showing their address as Bay Hall,  Huddersfield. I imagined this to be a mill owner’s mansion and when I saw the name mentioned in a book about Huddersfield I wrote to the author to make enquiries, as I intended to visit the town. He replied that four or five families now live in the original house but it may have given its name to the surrounding district. In fact, when I did visit there I found it difficult to picture it as a complete house, as it appeared to be a conglomeration of odd buildings and a far cry from what I had imagined.

There used to be a painting of this mid-Victorian couple in my grandmother’s home in London – a forbidding – looking pair, especially John – or so they seemed to me as a child. These, together with a much more interesting picture of an earlier Hannah – a man with red hair and holding a document bearing a seal – had to be abandoned when I inherited them. It was wartime and we had other things on our minds. They would never have fitted into a modem flat anyway. My Hannah grandfather died long before I was born, so that I was never able to ask him – even had I been interested then – who the man was. I also own a silhouette, which could be of the same man. On the back is written Mr Hanay (one n and a y) but no trade label showing the artist. This started my interest in silhouettes and, from seeing others in an identical style, I am almost certain this was by William Bullock of Liverpool. To be more accurate, the artist William Alport, who rented a studio in Bullock’s Museum there. The subject could be one of the three Hannahs – all born around 1760 – if it was John Hannah of Hannahfield could he have been in Liverpool en-route from/to Jamaica? My guess is that it is of Alexander Hannah who lived either in Blackburn or Manchester.

Among other relics, there is a fob seal with the Hannay coat of arms and a set of coachman’s buttons bearing the crest. I believe these belonged to Alexander Hannah, born 1823, and that it was his wife who had them made. It was the thing in Victorian days to be able to produce a family coat of arms, but of course these Hannahs were not armigerous. In Margaret Hannah’s album there are some examples of fine penmanship of the 1830’s. I had owned it for a long time before I noticed the signature – J Craik on one page. This name seemed familiar and on rereading a book on Dumfries dated 1832, which belonged to her son Alexander, I found that a Mr Craik taught penmanship at the Academy. Perhaps this means that the Huddersfield Hannahs visited Dumfries. There are many place names in the album, which Margaret Hannah must have taken on her travels, such as Kendal, Matlock and Lytham, but not Dumfries. Such are the small clues, which tantalize us. Margaret Hannah must have been musical, or perhaps it was politeness, which made one contributor to the album write a typical Victorian poem “To Mrs Hannah,” containing the verse “Then raise the voice thou favour’d one And others please as thou pleas’d me Thy varied song when thou art gone Will still be sweet to my memory.”

I turn to the album again for sad news – the last entry is by Robert Bell, (perhaps the Reverend Bell) and dated 1868. It says “Succour and hope – words affectionately offered to Mr & Mrs John Hannah and their only son in their season of deep and long continued trial” and then follows some verses. As John died in 1869 it may refer to his illness. When I visited Huddersfield I was able to see a notebook kept by Isaac Hordem, cashier of the Ramsden Estate in the 19th century. A brief entry in 1877 said, “Hannah’s property purchased.” You will remember I mentioned the Blount family and part of their family tree was included in the Hannahfield petition to show that the petitioner was a cousin to John of Hannahfield on both male and female sides. Some place names on this intrigued me – particularly “Stay the Voyage.” Through our Clan Society I had obtained a copy of the Galloway family Place Names from its author Dr Russell, so I wrote to him asking if he knew of this place name. He did not, but wrote to the Dumfries Standard with my query. This produced someone who went to the paper’s offices with a Blount family tree about 3 to 4 feet square, which mentioned the places I had asked about – all except “Stay the Voyage.” As it gave his address I wrote to him and in our subsequent correspondence he had produced some interesting old papers belonging to the Blount family dating back to 1705. What interested me is that the family tree was also inscribed “Hannahfield Succession referred to in a petition to the Lords Commissioners of Her Majesty’s Treasury in 1870.” Not only that, but the house in which he lives in Dumfries is called Hannahville and was built by John Hannah in, it is believed 1880. Here is yet another John Hannah who does not belong to my branch. Perhaps one of our members can claim him? I should be interested to know.