Founded in 1960, the Clan Hannay Society is dedicated to global fellowship and friendship of all those bearing or descended from the family names Hannay, Hannah, Hanna or Hanney. 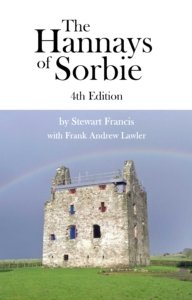 First published in 1961, The Hannays of Sorbie traces the roots of those who bear the Hannay name (and its variants Hannah, Hanna and Hanney) from medieval origins in Southwestern Scotland to the present-day global family diaspora. This 4th edition (2019), the newest in almost 30 years, has been revised, expanded, annotated and indexed.

Available on Amazon in paperback or kindle.

Featured from the Shop

See more in our Online Shop Help us rebuild Sorbie Tower! Please leave your messages of support (whether you are donating or not) in our restoration appeal on-line Book.

Dr. David R. Hannay, Chief of Clan Hannay of Kirkdale and That Ilk, trained at Cambridge University and St. George’s Hospital in London. He taught at the University of Glasgow and was Professor of General Practice in Sheffield before returning to Galloway as a partner in a local practice and Director of a Regional Research Network. He plays bagpipes, both Highland and Scottish smallpipes, and has enjoyed traveling the world and meeting members of the Clan  diaspora across the globe. He and his wife Janet, a teacher and environmentalist, live in Wigtownshire.

The ancient keep of Sorbie, owned by the Clan Hannay Society, was build in the 16th century.  The ancient seat of the family, it was constructed beside the site of a twelfth-century wooden fort whose foundations can still be seen today. A major restoration campaign is in the works to return the structure to its former glory.

Find out more in our Sorbie Tower section.

Captain Hanna was a 46-year-old father of 4 from Kilkeel, Co Down. He was an electrician as well as a member of the Ulster Defence Regiment. As an electrician he was working at an RAF base near Downpatrick.

The IRA planted a bomb beneath his car and as he drove away from his home on Harbour Drive, Kilkeel, the bomb exploded.

The explosion occurred at 12:15AM after he had driven only 50 yards from his family home. A neighbour said: "Gordon waved to me as he was passing and a few seconds later I heard a bang.

One of Captain Hanna's colleagues who arrived at the scene said that Captain Hanna had volunteered at the local fire service for 26 years. He said: "I saw a person whom I knew to be Gordon, a personal friend of mine, lying in the rear of the car. He appeared to be badly injured.

Assisted by other civilians, I released Gordon via the rear offside door which had been stuck. At this stage the fire brigade had not been called. The ambulance arrived and took him to hospital. I knew him from childhood to manhood, we were pals, it was a terrible shock". Captain Hanna was still alive when an ambulance arrived but died on the way to the Mourne District Hospital.

Today we remember him.

When this happens, it's usually because the owner only shared it with a small group of people, changed who can see it or it's been deleted.
View on Facebook
·Share

Buck’s birthday was actually yesterday. We were not able to leave town as planned due to him getting sick and Covid.

A thank you to all my many Hanna kin who sent my husband Buck birthday cards and messages for his 85th birthday...he was astounded at getting cards from folks from Ireland and Scotland, as well as all over the US that he’s never met, but are my family!!

Be sure to watch the video..it’s short. It’s about the cards he received and has a personal message from Buck. ... See MoreSee Less

Please note that the link to the ASF site should be americanscottishfoundation.com/business/corps/clan_hannay.htmlThe American-Scottish Foundation® is proud to work with Clan Hannay Society to highlight the restoration of Sorbie Tower, a directed giving project of the Foundation.

Over the past 4 years, we are proud to have worked with Clan Hannay on their capital campaign. As a result of donations, the internal stair well at Sorbie Tower has now been stabilized, and the scaffolding purchased for ongoing maintenance, as well as the installing of a temporary roof.